Glass reflecting an abstract pattern of cumulus clouds obscures rows of bottles seen behind. These prominent windows front the finest home in Bodie, owned by James Stuart Cain from the 1890s - 1940s. Bodie is now California's official state gold rush ghost town. Jessie McGath originally built this house for his new wife in 1879, and JS Cain bought it in the 1890s. Cain moved to Bodie when he was 25 and built an empire starting with putting lumber barges on Mono Lake and transporting timber to support mine shafts, stoke boilers for machinery, build & heat buildings, and cook food. Cain eventually took control of the Stamp Mill though court action and went on to be the principal property owner and one of the richest men in town. Bodie State Historic Park lies in the Bodie Hills east of the Sierra Nevada mountain range in Mono County, near Bridgeport, California, USA. After W. S. Bodey's original gold discovery in 1859, profitable gold ore discoveries in 1876 and 1878 transformed "Bodie" from an isolated mining camp to a Wild West boomtown. By 1879, Bodie had a population of 5000-7000 people with 2000 buildings. At its peak, 65 saloons lined Main Street, which was a mile long. Bodie declined rapidly 1912-1917 and the last mine closed in 1942. Bodie became a National Historic Landmark in 1961 and Bodie State Historic Park in 1962. This image was stitched from two photos to increase pixel count and potential print size. 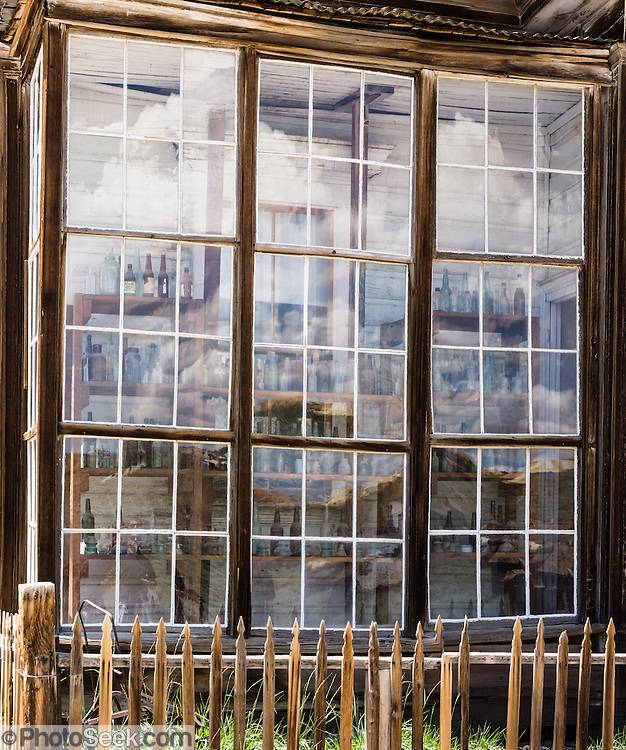