Pu'ukohola Heiau National Historic Site preserves an important Hawaiian temple on the Big Island of Hawaii, USA. Built to fulfill a historic prophecy, Puukohola Heiau is one of the last sacred structures built in the Hawaiian Islands before Christian influence. Kamehameha the Great (born in North Kohala) was advised by his kahuna (priest) to build Puukohola Heiau and dedicate it to the war god Kukailimoku (Ku) to help in his efforts to unite the Hawaiian Islands. The fortress-like heiau (sacred temple of the Hawaiian religion) was built overlooking the Kohala coast between 1790 and 1791. With help from European trade ships, warships, cannon, and military experience, King Kamehameha ultimately united the warring Hawaiian Islands in 1810. At the same time that George Washington was serving as the United States' first president, Kamehameha was using Puukohola Heiau to secure his mana or spiritual power to help unify the Hawaiian people. The massive structure (224 by 100 feet surrounded by walls 16-20 feet high) was built without mortar, using water-worn lava rocks believed to have been passed hand-by-hand in a human chain all the way from Pololu Valley, some 25 miles away. These lonely rocks on a dry desert hill mark an important era in Hawaiian history, just 28 miles north of Kona International Airport. Before it was made a state of the USA in 1959, Hawaii was previously an 1810 kingdom, 1893 protectorate, 1894 republic, and 1898 territory. This image was stitched from multiple overlapping images. 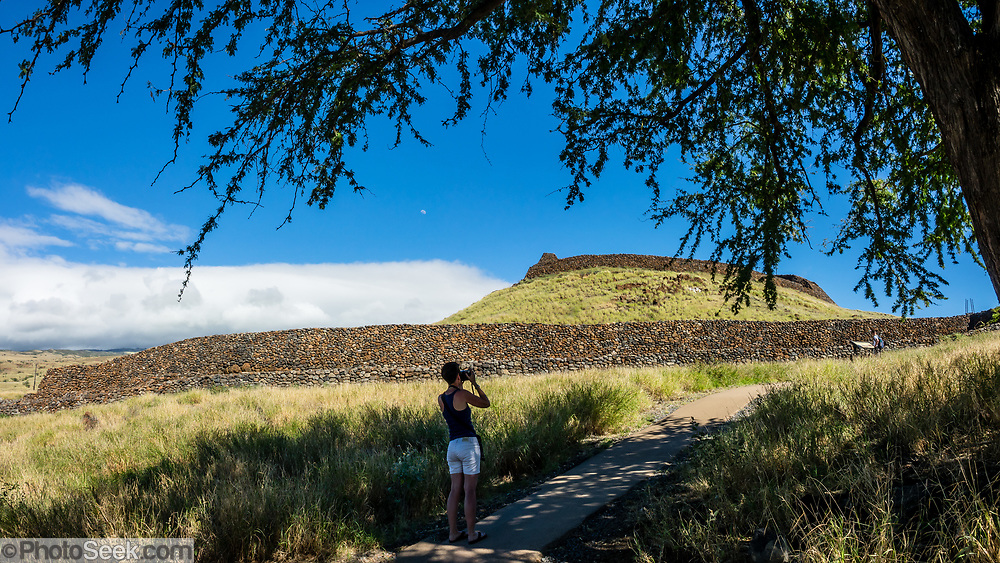