High tide nearly touches the bottom of the covered bridge. Irish River or Vaughan Creek #1 Covered Bridge was built in 1935 in picturesque St. Martins, in Saint John County, New Brunswick, Canada. The lighthouse building was built in 1983 to display the lantern room from the 1883 Quaco Head Lighthouse and to serve as a Visitor Information Center in St. Martins. Climb to the lantern to view the harbour and two historic covered bridges. Observe the extreme tides of Bay of Fundy lifting fishing boats near the bridge. Drive through the covered bridge and go 7 km on Big Salmon River Road to reach the start of the Fundy Trail Parkway, a 16 kilometer auto route along the Fundy coast ending at Big Salmon River, a former lumbering center. Bay of Fundy has the highest tidal range in the world, due to a resonance of being just the right length (270 km) matching the gravitational pushing cycle of the Moon that causes the tides. Coincidentally, the time it takes a large wave to go from the mouth of the bay to the inner shore and back is practically the same as the time from one high tide to the next. (You can see the effect of resonance for yourself by steadily pushing a long pan of water back and forth: an optimal pushing frequency for a given pan length will build up a high wave of water which sloshes out; but pushing too fast or too slow won't build up the big wave.) Two high tides occur per day, one when the ocean side is nearest the Moon, and one on the side of the Earth most distant from the Moon, about 12 hours and 25 minutes from one high tide to the next. The Bay of Fundy is on the Atlantic coast of North America, on the northeast end of the Gulf of Maine between the Canadian provinces of New Brunswick and Nova Scotia. St. Martins (2006 population: 386) is 40 km east of Saint John. St. Martins (originally known as Quaco) was founded by Loyalists in 1783. Its important 1800s shipbuilding center faded, leaving tourism as today's major industry. 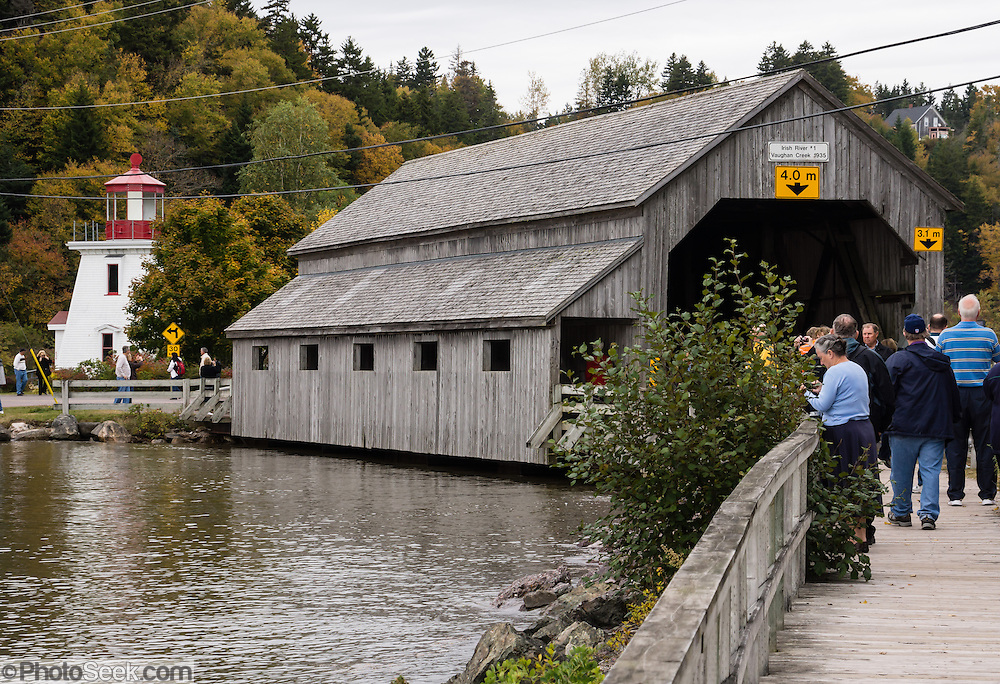