Visitors walk beneath Corinthian order columns at the Great Theatre of Ephesus, in the Republic of Turkey. Published in the travel handbook "Moon Istanbul & the Turkish Coast" by Jessica Tamtürk, Avalon Travel Publishing, 2010. The Great Theatre of Ephesus, the largest outdoor theatre in the ancient world, was begun during Hellenistic times (probably during the reign of Lysimachos in the third century BC), and was altered and enlarged from 41-117 AD by Roman emperors Claudius, Nero, and Trajan. The Greek builders dug out a space from Mount Pion (present-day Panayir Dagi) to fit the 30-meter (100-foot) high theater, which accommodated 25,000 people, or 10 percent of the population of Roman Ephesus at its peak. The theatre exhibited the fights of wild beasts and of men with beasts. In the 1st century AD, the Apostle Paul delivered a sermon condemning pagan worship in this theater. Subsequently, followers of the Ephesian cult of Artemis forced Paul and his followers out. Over several centuries, the Cayster River filled the harbor of Ephesus with silt, creating a malaria-infested swamp, pushing the sea 4 kilometers away and cutting off the city's commerce and wealth. By the 6th century AD, Emperor Justinian decided to build the Saint John Basilica 3 kilometers away, which effectively moved the city center to Selçuk. 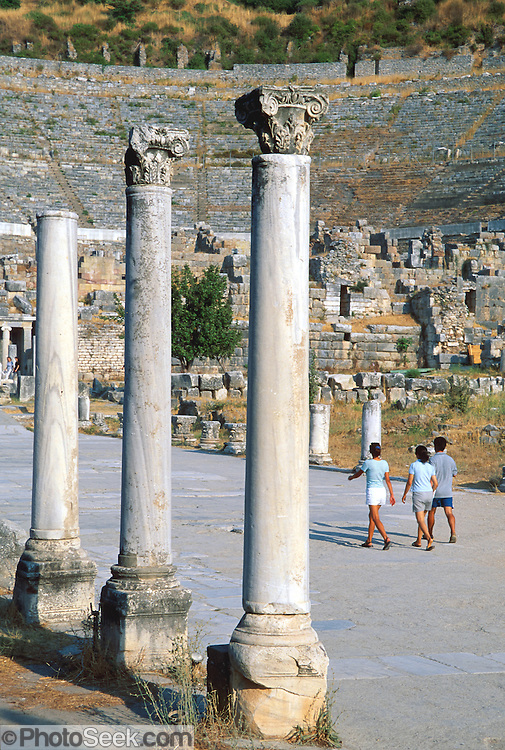