This Galápagos Penguin (Spheniscus mendiculus) lives at Tagus Cove, on Isabela (Albemarle) Island, Ecuador, South America. The Galápagos Penguin is endemic to the Galápagos Islands, and is the only penguin to live on the equator (no penguins live further north). It can survive due to the cool temperatures resulting from the Humboldt Current and cool waters brought up from great depths by the Cromwell Current. They only forage during the day, usually near their breeding site, and depend on the cold nutrient-rich currents to bring them food such as schooling fish, mainly mullet, sardines, and sometimes crustaceans. The species is endangered, one of the world’s rarest penguin species, with an estimated population size of around 1,500 individuals in 2004. On land, the penguins must keep an eye out for crabs, snakes, owls, and hawks, while in the water they must avoid sharks, fur seals, sea lions and orcas. Its nearest relatives are the African Penguin, the Magellanic Penguin and the Humboldt Penguin. The Galápagos Penguin lives mainly on Fernandina Island and the west coast of Isabela Island, but small populations are scattered on Santiago, Bartolome, northern Santa Cruz, and Floreana. Galápagos Penguins have a black head with a white border running from behind the eye, around the black ear-coverts and chin, to join on the throat. They have blackish-grey upperparts and whitish underparts, with two black bands across the breast, the lower band extending down the flanks to the thigh. Juveniles have a wholly dark head, greyer on side and chin, and no breast-band. 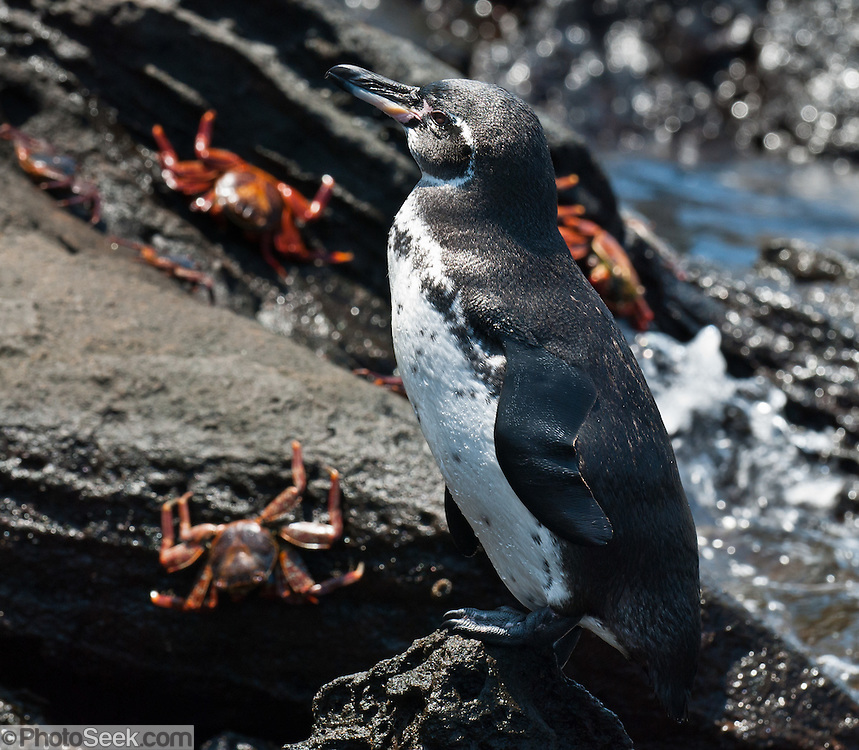