High winds drive wave clouds over Mount Fitz Roy (3405 meters or 11,170 feet) in the Andes mountains, in Los Glaciares National Park, near El Chaltén village, Argentina, Patagonia, South America. Native Tehuelche (Aonikenk) people called this mountain (and others) Chaltén, meaning "smoking mountain," which is understandable from the frequent orographic clouds. The atmospheric internal waves that form wave clouds are created as stable air flows over a mountain creating an oscillation of uplift and descent. Clouds can form from invisible water vapor turning into white droplets at the cooled crests of internal waves and evaporate (due to adiabatic heating) as the wave descends. First climbed in 1952 by French alpinists Lionel Terray and Guido Magnone, Mount Fitz Roy has very fickle weather and is one of the world's most challenging technical ascents. It is also called Cerro Chaltén, Cerro Fitz Roy, and Monte Fitz Roy (with a space before the R). Cerro is a Spanish word meaning hill. In 1877, explorer Perito Moreno named "Cerro Fitz Roy" for Robert FitzRoy (no space before the capital R) who, as captain of the HMS Beagle, had travelled up the Santa Cruz River in 1834 and charted much of the Patagonian coast. Spanning both Argentina and Chile, the foot of South America is known as Patagonia, a name derived from coastal giants ("Patagão" or "Patagoni" who were actually Tehuelche native people who averaged 25 cm taller than the Spaniards) who were reported by Magellan's 1520s voyage circumnavigating the world. The Patagonia company based their clothing logo on the shape of Mount Fitz Roy, after Yvon Chouinard's ascent and subsequent film in 1968. The town of El Chaltén was built in 1985 by Argentina to help secure the disputed border with Chile. The nearest airport is 220 km south at El Calafate. 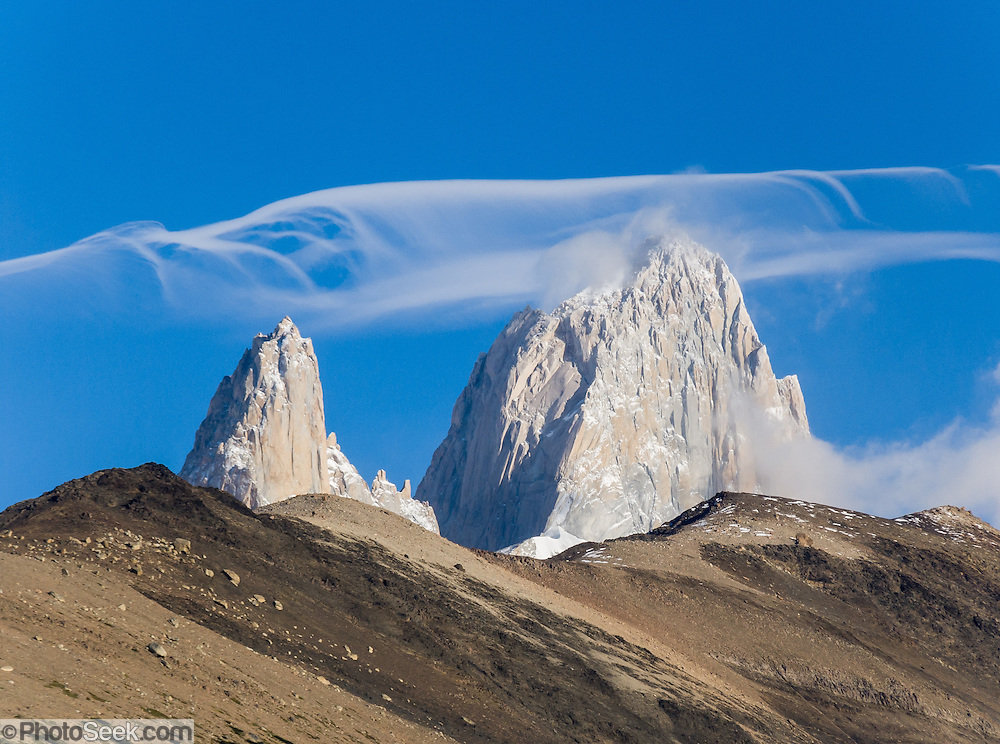