Villarrica, one of Chile's most active volcanoes, rises to 2847 meters (or 9341 ft) elevation in Villarrica National Park in the Andes mountain range, above the lake and town of the same name, in the Los Lagos Region, Zona Austral, Chile, South America. Cattle wander in front of a car on a gravel access road. The volcano is also known as Rucapillán, a Mapuche word meaning "House of the Pillán." Villarrica, with its lava of basaltic-andesitic composition, is one of only five volcanoes worldwide known to have an active lava lake within its crater. The volcano usually generates strombolian eruptions, with ejection of incandescent pyroclasts and lava flows. Melting of snow and glacier ice as well as rainfalls often cause massive lahars (mud and debris flows), such as during the eruptions of 1964 and 1971. What international tourist literature calls the "Chilean Lake District" usually refers to the Andean foothills between Temuco and Puerto Montt including three Regions (XIV Los Ríos, IX La Araucanía, and X Los Lagos) in what Chile calls the Zona Sur (Southern Zone). In Chile, Patagonia includes the territory of Valdivia through Tierra del Fuego archipelago. Spanning both Argentina and Chile, the foot of South America is known as Patagonia, a name derived from coastal giants ("Patagão" or "Patagoni" who were actually Tehuelche native people who averaged 25 cm taller than the Spaniards) who were reported by Magellan's 1520s voyage circumnavigating the world. 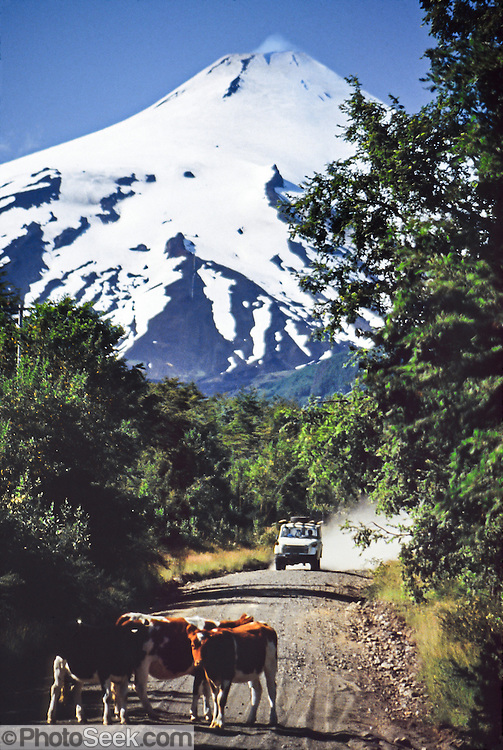