On a plaster replica of the Easby Cross at the parish church at Easby Abbey, the rear face has a continuous vine scroll inhabited with beasts, an early appearance of this motif in Anglo-Saxon art. The original of this sandstone standing cross from AD 800–820 from the Kingdom of Northumbria is now in the Victoria and Albert Museum, London. Visit Easby Abbey on the River Swale, on the outskirts of Richmond, in the Richmondshire district of North Yorkshire county, England, United Kingdom, Europe. The cross was erected just as the golden age of Northumbrian art was ending with devastating Viking raids, which began with the attack on Lindisfarne in 793. Picturesque Easby Abbey (Abbey of St Agatha) was founded in 1152, but was suppressed by King Henry VIII in 1536-7 and fell into ruin. This Premonstratensian abbey was home to canons (ordained priests), rather than monks. England Coast to Coast hike day 9 of 14. [This image, commissioned by Wilderness Travel, is not available to any other agency providing group travel in the UK, but may otherwise be licensable from Tom Dempsey – please inquire at PhotoSeek.com.] 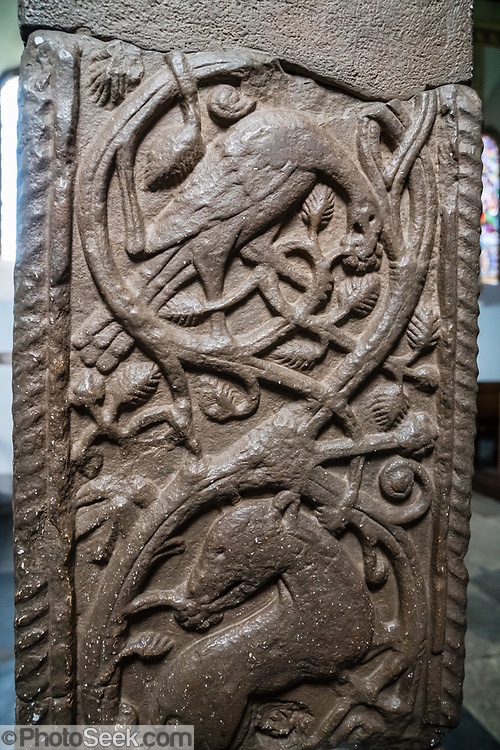