Emergency tidal escape platform. Visit Hopewell Rocks (Flowerpot Rocks) at Hopewell Cape, near Moncton, New Brunswick, Canada. Hopewell Rocks have one of most extreme tidal ranges in the world: up to 16 meters (52 feet) vertically. Waves and tides twice per day have eroded the base of the rocks faster than the tops, leaving arches and curiously shaped formations of dark sedimentary conglomerate and sandstone rock. For best photo lighting, go in morning (or spectacular sunrise) during the first low tide of the day, safe for 3 hours before low tide until 3 hours after. Walking the beach is easy until its southern end, where The Ledges, a ridge of slippery limestone, can be clambered over to reach Demoiselle Beach. Bay of Fundy has the highest tidal range in the world, due to a resonance of being just the right length (270 km) matching the gravitational pushing cycle of the Moon that causes the tides. Due to the bay's optimal size, the time it takes a large wave to go from the mouth of the bay to the inner shore and back is practically the same as the time from one high tide to the next. (See the effect of resonance by steadily pushing a long pan of water back and forth: an optimal pushing frequency for a given pan size will build up a high wave of water which sloshes out; but pushing too fast or too slow won't build up the big wave.) Two high tides occur per day, one when the ocean side of the Earth is nearest the Moon, and one on the side most distant from the Moon, about 12 hours and 25 minutes from one high tide to the next. The Bay of Fundy is on the Atlantic coast of North America, on the northeast end of the Gulf of Maine between the Canadian provinces of New Brunswick and Nova Scotia. Address: Hopewell Rocks Ocean Tidal Exploration Site (phone 506-734-3429), 131 Discovery Rd, Hopewell Cape, NB E4H 4Z5. 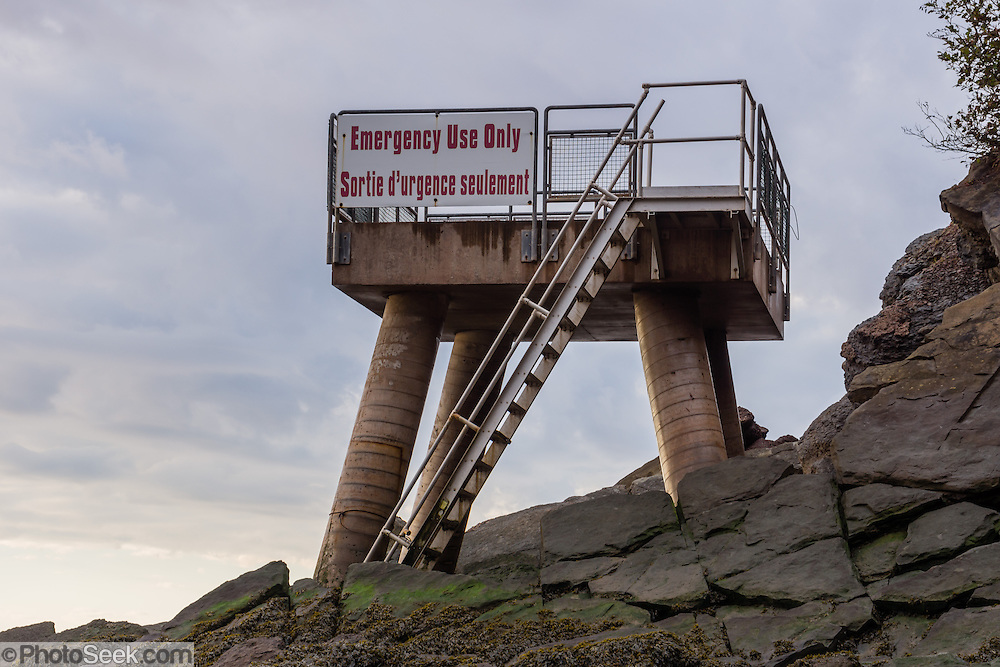