This statue of Scottish author Sir Walter Scott is inside the 1846 Scott Monument, the largest monument to a writer in the world. Find it in Princes Street Gardens, near Edinburgh Waverley Railway Station (named after Scott's Waverley novels), in Scotland, United Kingdom, Europe. This Victorian Gothic monument was designed by John Steell. It is made from white Carrara marble, showing Scott seated, resting from writing one of his works with a quill pen and his dog Maida by his side. Sir Walter Scott, 1st Baronet, FRSE (1771-1832) was a Scottish historical novelist, playwright and poet. Many of his works remain classics of both English-language literature and of Scottish literature, including: Ivanhoe, Rob Roy, Old Mortality, The Lady of the Lake, Waverley, The Heart of Midlothian and The Bride of Lammermoor. Scott was also an advocate, judge and legal administrator by profession, and throughout his career combined his writing and editing work with his daily occupation as Clerk of Session and Sheriff-Depute of Selkirkshire. A prominent member of the Tory establishment in Edinburgh, Scott was an active member of the Highland Society and served a long term as President of the Royal Society of Edinburgh (1820–32). In the background of the Scott Monument fly the UK's Union Jack and Scottish flag, atop the Bank of Scotland Head Office building (HBOS, Lloyds Banking Group) on The Mound. Inside is Museum on the Mound, which focuses on money, coinage and economics. 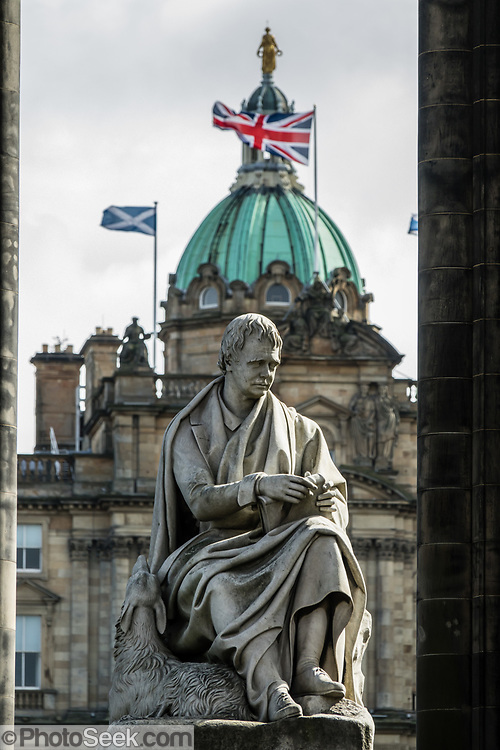