The four-sided Intihuatana (Hitching Post of the Sun) ritual stone sculpture was likely the most sacred place in Machu Picchu, a magnificent Inca archeological site in the Cordillera Vilcabamba, Andes mountains, Peru, South America. The name Intihuatana (coined perhaps by Hiram Bingham) is derived from the Quechua language: inti means "sun"; huata- is a Spanish spelling of wata-, the verb root "to tie or hitch (up)"; and the -na suffix derives nouns for tools or places. Scholars dispute various theoretical uses of Intihuatana such as a sacrificial altar, as a temple aligned with the surrounding mountains and their resident apus (gods), as a solar observatory (but unlikely as a sundial), or simply as an abstract art work. The mysterious Intihuatana is an important huaca (or waqa), a revered object, in Quechua language. The stone is at 13°9'48" South latitude. Machu Picchu was built around 1450 AD as an estate for the Inca emperor Pachacuti (14381472). Spaniards passed in the river valley below but never discovered Machu Picchu during their conquest of the Incas 1532-1572. The outside world was unaware of the "Lost City of the Incas" until revealed by American historian Hiram Bingham in 1911. Machu Picchu perches at 2430 meters elevation (7970 feet) on a well defended ridge 450 meters (1480 ft) above a loop of the Urubamba/Vilcanota River (Sacred Valley of the Incas). UNESCO honored the Historic Sanctuary of Machu Picchu on the World Heritage List in 1983. 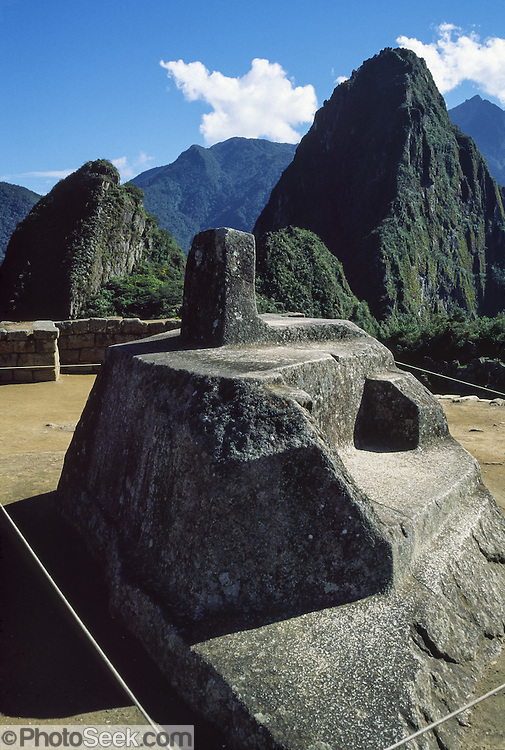