The maxim "see no evil, hear no evil, speak no evil" was popularized from the 1600s carving of the proverbial three wise monkeys on a storehouse in Toshogu shrine in Nikko, Japan. One interpretation is to be of good mind, speech and action. But in the Western world, the phrase often refers to those who deal with impropriety by turning a blind eye. The monkeys are Japanese macaques, a common species in Japan. The three monkeys are Mizaru, covering his eyes, who sees no evil; Kikazaru, covering his ears, who hears no evil; and Iwazaru, covering his mouth, who speaks no evil. Outside of Japan, the last two of the monkeys' names have sometimes been corrupted, resulting in Mizaru, Mikazaru and Mazaru. Hidari Jingoro may have carved these panels to incorporate Confucius's Code of Conduct, using the monkey as a way to depict man's life cycle. Out of eight panels, the iconic three wise monkeys are panel 2. The philosophy likely originated with a Tendai-Buddhist legend, from China in the 700s (Nara Period). The figures may represent the three dogmas of the so-called middle school of the sect. Toshogu Shrine is the final resting place of Tokugawa Ieyasu, the founder of the Tokugawa Shogunate that ruled Japan for over 250 years until 1868. Ieyasu is enshrined at Toshogu as the deity Tosho Daigongen, "Great Deity of the East Shining Light". Initially a relatively simple mausoleum, Toshogu was enlarged into the spectacular complex seen today by Ieyasu's grandson Iemitsu during the first half of the 1600s. The lavishly decorated shrine complex consists of more than a dozen buildings set in a beautiful forest. Toshogu contains both Shinto and Buddhist elements, as was common until the Meiji Period when Shinto was deliberately separated from Buddhism. Toshogu is part of Shrines and Temples of Nikko UNESCO World Heritage site. 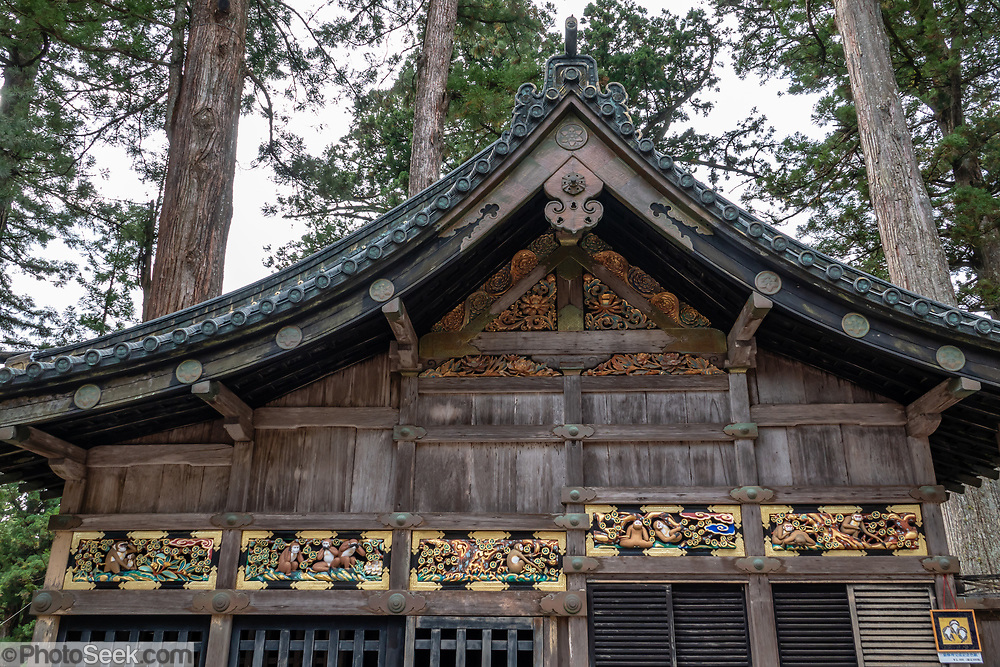