Standing within the Old Temple built 3,000 years ago at Chavin de Huantar archeological site, the mysterious Lanzon de Chavin obelisk is one of the most impressive monuments of early advanced Andean civilization. Chavin de Huantar is in the northern Andean highlands of Peru, South America. The knife-shaped Lanzon sacred stone sculpture, statue, or stela is artfully carved from white granite in a roughly lance-like shape 4.5 meters (15 feet) high. It depicts a human-feline hybrid with claws, writhing snakes for hair and eyebrows, fangs curved sideways in a smile (thus the nickname 'Smiling God'), and one arm raised while the other is lowered. The Lanzon de Chavin is variously interpreted as a principal deity of Chavin, as an oracle with the power to speak (through a hole in the roof of the chamber), or as a symbol of trade, fertility, dualism, or humankind's interaction with nature, or any combination of these. The major structures of Chavin de Huantar were built over many stages starting prior to 1200 BC and mostly finished by 750 BC. Religious ceremonial use ended by 500-400 BC, after which the Huaraz culture settled in. The sophisticated temple builders imported white granite and black limestone from distant quarries and demonstrated advanced skills in organization, drainage, acoustics, temperature control, metallurgy, and soldering. Chavin de Huantar is east of the Cordillera Blanca at 3180 meters elevation (10,430 ft) at the head of Conchucos Valley, a long day trip by car from Huaraz. The major pre-Inca culture of Chavín created the first widespread, recognizable artistic style in the Andes during their advanced civilization from 900 BC to 200 BC, and extended their influence to other receptive civilizations along the coast. The Chavín were based in the Mosna Valley where the Mosna and Huachecsa rivers merge, within the quechua, jalca, and puna life zones. UNESCO honored Chavin Archaeological Site on the World Heritage List in 1985. 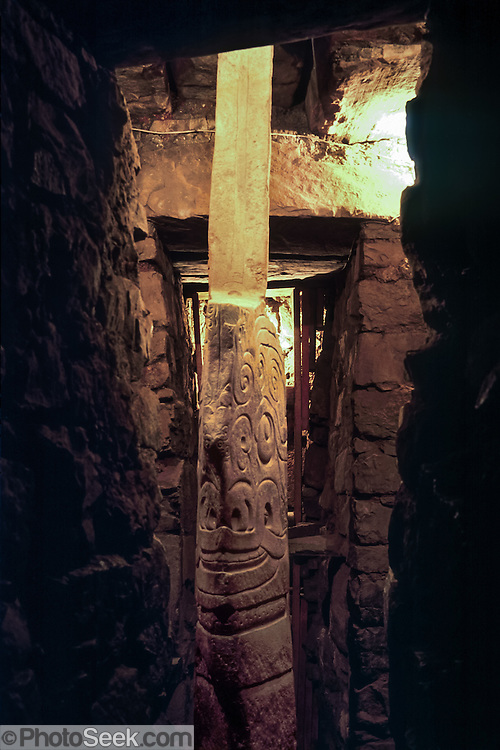