Inside Byodo-In Temple is a statue of the Lotus Buddha, a large carved wooden image depicting Amida (or Amitabha), a celestial buddha according to the scriptures of Mahayana Buddhism. The Buddha is an original art work by Japanese sculptor Masuzo Inui. The carving was covered with cloth, painted with three coats of gold lacquer, and later coated with gold leaf. The Amida Hall (Amida-do) is also known as the Phoenix Hall (Hoo-do) because of a pair of Chinese phoenix statues on the roof. The hall and its artistry portray the culture of the Fujiwara clan's aristocracy of Japan. The peaceful Byodo-In Temple is in Valley of the Temples Memorial Park, at 47-200 Kahekili Highway, Kaneohe, on the island of Oahu, Hawaii, USA. Byodo-In Temple ("Temple of Equality") was built in 1968 to commemorate the 100 year anniversary of the first Japanese immigrants to Hawaii. This Hawaii State Landmark is a non-practicing Buddhist temple which welcomes people of all faiths. Byodo-In Temple in O'ahu is a half-scale replica of the original Byodo-in Temple built in 1053 in Uji, Japan (a UNESCO World Heritage Site). 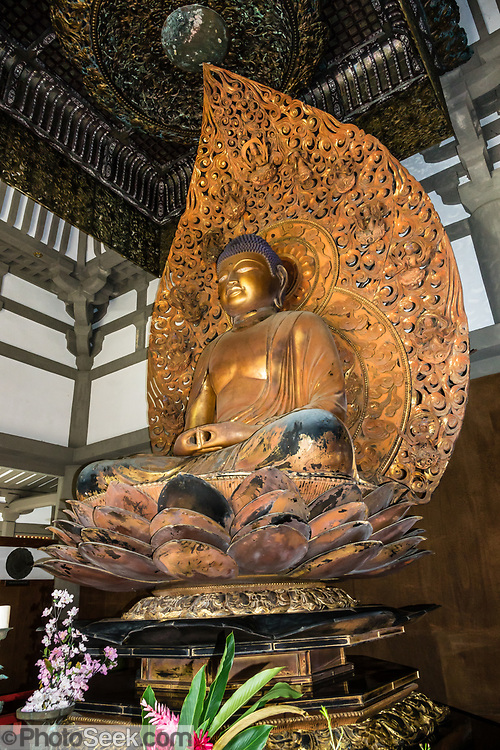