In a large painting in St Giles' Cathedral, a Scottish unicorn paired with an English lion defines the coat of arms of James VI, as the first king of Great Britain and Ireland. What's with the unicorn? Unicorns were first depicted in 2600 BC in ancient seals of the Indus Valley Civilization and were mentioned by the ancient Greeks. In Celtic mythology the unicorn symbolized purity, innocence, masculinity and power. The proud, haughty unicorn was chosen as Scotland's national animal because it would rather die than be captured, just as Scots would fight to remain sovereign and unconquered. The unicorn was first used on the Scottish royal coat of arms by William I in the 1100s, and two unicorns supported the shield until 1603. When James VI became James I of England and Ireland in 1603, he replaced one unicorn with the national animal of England, the lion, to demonstrate unity. Believed to be the strongest of all animals, wild and untamed, the mythical unicorn could only be humbled by a virgin maiden. However, Scotland's unicorn in the coat of arms is always bounded by a golden chain, often shown around its neck and body, symbolizing the power of the Scottish kings, strong enough to tame a unicorn. Today, the version of the royal coat of arms used in Scotland emphasizes Scottish elements, placing the unicorn on the left and giving it a crown, whereas the version used in England and elsewhere places the unicorn on the right and gives English elements more prominence. The Scottish version uses the motto "Nemo me impune lacessit," meaning "No one wounds (touches) me with impunity." The English version says "Dieu et mon droit," meaning "God and my right," the motto of the Monarch of the United Kingdom. St Giles' Cathedral (High Kirk of Edinburgh) is the principal place of worship of the Church of Scotland in Edinburgh. 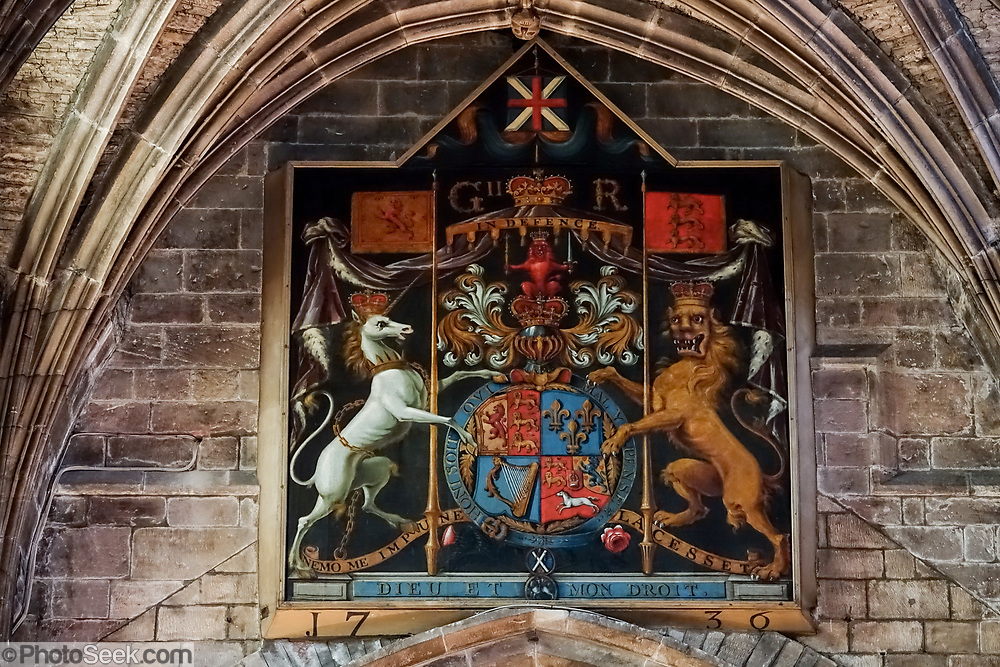