Under a prickly pear cactus tree, a giant Galapagos Tortoise fully extends its legs and neck in a cleaning posture for finches to remove parasites at Charles Darwin Research Station, Puerto Ayora, Santa Cruz Island, Galapagos Islands, Ecuador, South America. This species is the largest living tortoise and is native to seven islands of the Galápagos archipelago. Fully grown adults can weigh over 300 kilograms (661 lb) and measure 1.5 meters (5 feet) over the curve of the shell. They are long-lived with a life expectancy of up to 100-150 years in the wild. Populations fell dramatically because of hunting and the introduction of predators and grazers by humans since the 1600s. Only ten subspecies of the original twelve exist in the wild. Since Galápagos National Park and the Charles Darwin Foundation were established, hundreds of captive-bred juveniles have been released back onto their home islands. In 1959, Ecuador declared 97% of the land area of the Galápagos Islands to be Galápagos National Park, which UNESCO registered as a World Heritage Site in 1978. Ecuador created the Galápagos Marine Reserve in 1998, which UNESCO appended in 2001. Published in Wilderness Travel 1990 Catalog. 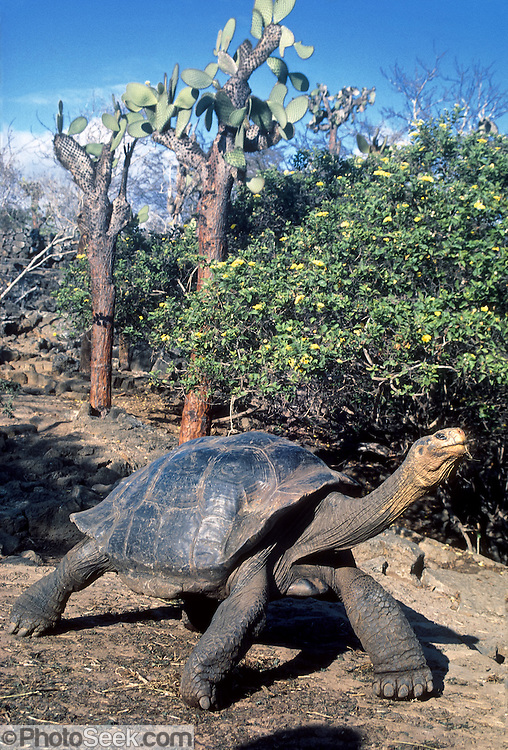