Gondolas are moored on Saint Mark's Basin across from Chiesa di San Giorgio Maggiore, a 16th century Benedictine church on the island of the same name in Venice, Italy, Europe. The basilica was designed in the classical renaissance style by Andrea Palladio and built from 1566-1610. The white marble basilica rises above the blue water of the lagoon (San Marco Basin and Canal) across from Piazzetta San Marco. The campanile (bell tower), first built in 1467, fell in 1774, and was rebuilt in neo-classic style by 1791. Gondolas are traditional, flat-bottomed rowing boats which ferry people through Venetian canals. From a peak of 10,000 gondolas 200 years ago, just 500 gondolas now serve Venice. The banana-shaped modern gondola was developed in the 1800s. The left side of the gondola is made longer than the right side to resist leftwards drift at the forward stroke. The gondolier stands on the stern facing the bow and rows just on the right side, with a forward stroke and compensating backward stroke. The oar or rèmo is held in an oar lock, or fórcola, shaped for several rowing positions. The decorative fèrro (meaning iron) ornament on the front can be made of brass, stainless steel, or aluminum, as counterweight for the gondolier standing near the stern. The six horizontal lines and curved top of the ferro represent Venice's six sestieri (districts) and the Doge's cap. Painting gondolas black originated as a sumptuary law banning ostentatious competition between nobles. The romantic "City of Canals" stretches across 117 small islands in the marshy Venetian Lagoon along the Adriatic Sea in northeast Italy, Europe. Venice and the Venetian Lagoons are honored on UNESCO's World Heritage List. 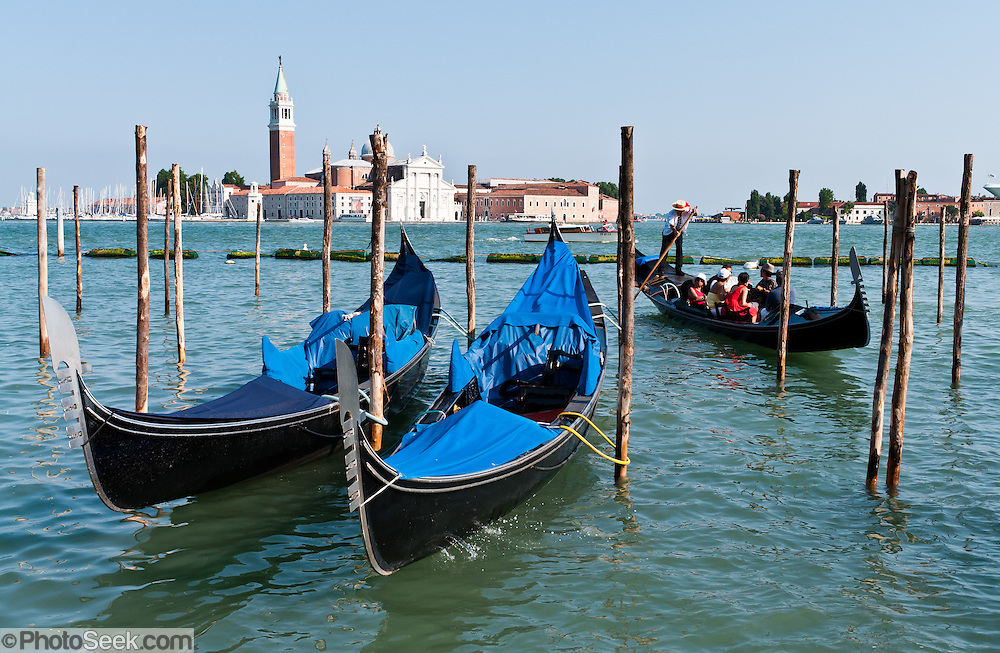