From Inspiration Point, see Middle and Upper Genesee Falls amid the splendor of autumn leaf colors, at Letchworth State Park, near Portageville, New York, USA. In Letchworth State Park, renowned as the "Grand Canyon of the East," the Genesee River roars northeast through a gorge over three major waterfalls between cliffs as high as 550 feet, surrounded by diverse forests which turn bright fall colors in the last three weeks of October. The large park stretches 17 miles between Portageville and Mount Morris in the state of New York, USA. Drive or hike to many scenic viewpoints along the west side of the gorge. The best walk is along Gorge Trail #1 above Portage Canyon from Lower Genesee Falls (70 ft high), to Inspiration Point, to Middle Genesee Falls (tallest, 107 ft), to Upper Genesee Falls (70 ft high). High above Upper Falls is the railroad trestle of Portageville Bridge, built in 1875, to be replaced 2015-2016. Geologic history: in the Devonian Period (360 to 420 million years ago), sediments from the ancestral Appalachian mountains eroded into an ancient inland sea and became the bedrock (mostly shales with some layers of limestone and sandstone plus marine fossils) now exposed in the gorge. Genesee River Gorge is very young, as it was cut after the last continental glacier diverted the river only 10,000 years ago. The native Seneca people were largely forced out after the American Revolutionary War, as they had been allies of the defeated British. Letchworth's huge campground has 270 generously-spaced electric sites. The image was stitched from 2 overlapping photos to increase depth of focus. 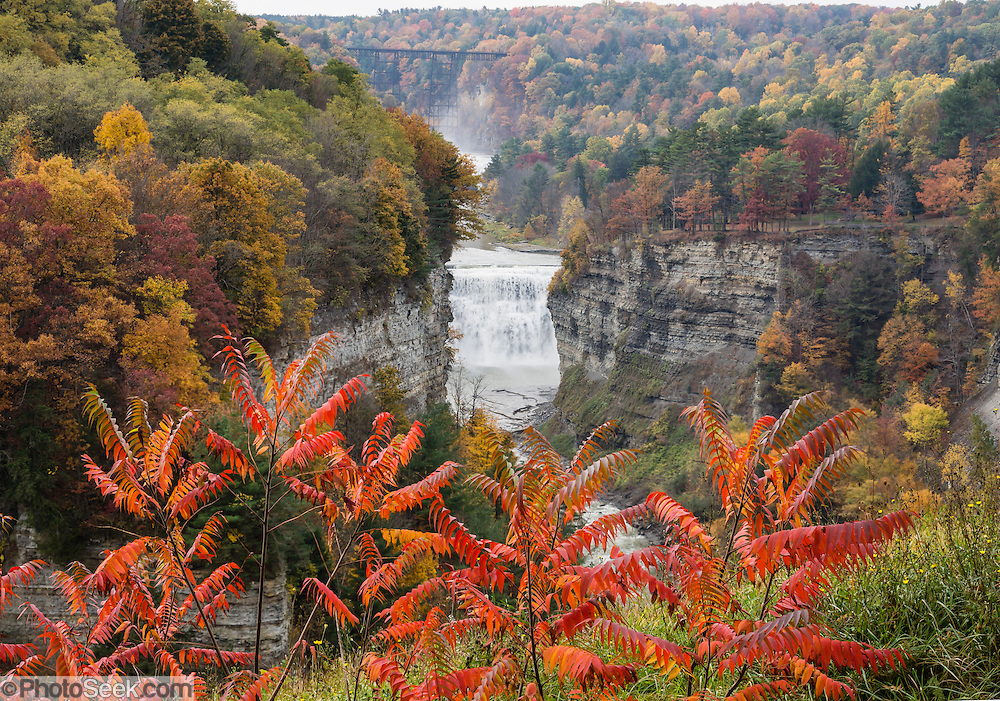