Beside the USS Missouri at Pearl Harbor, "Embracing Peace" (by sculptor Seward Johnson) recalls the iconic Alfred Eisenstaedt photograph, "V-J Day in Times Square," of a US Navy sailor kissing a stranger in New York City's Times Square on Victory over Japan Day (August 14, 1945). The photo was published in Life magazine with the caption, "In New York's Times Square a white-clad girl clutches her purse and skirt as an uninhibited sailor plants his lips squarely on hers." Ordered in 1940 and active in June 1944, the USS Missouri ("Mighty Mo") was the last battleship commissioned by the United States. She is best remembered as the site of the surrender of the Empire of Japan which ended World War II on September 2, 1945 in Tokyo Bay. In the Pacific Theater of World War II, she fought in the battles of Iwo Jima and Okinawa and shelled the Japanese home islands. She fought in the Korean War from 1950 to 1953. Decommissioned in 1955 into the United States Navy reserve fleets (the "Mothball Fleet"), she was reactivated and modernized in 1984 and provided fire support during Operation Desert Storm in January-February 1991. The ship was decommissioned in March 1992. In 1998, she was donated to the USS Missouri Memorial Association and became a museum at Pearl Harbor, on the island of Oahu, Hawaii, USA. For this photo’s licensing options, please inquire. 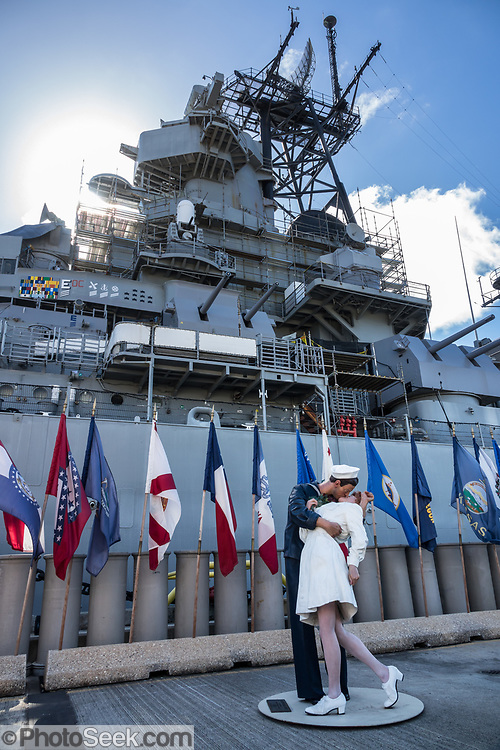