Sculpture of Aphrodite, Eros, and Pan from Delos Island 100 BC, Greece, Europe

National Archaeological Museum, Athens, Greece: a beautiful sculpture of Aphrodite, Eros, and Pan was found on Delos Island and dates from 100 BC. Aphrodite is the Greek goddess of love, beauty, pleasure, sexuality, and procreation. She was born of Uranus, or else from parents Zeus and Dione. Her Roman equivalent was Venus. Aphrodite is also known as Cytherea (Lady of Cythera) and Cypris (Lady of Cyprus) after the two cult-sites which claimed her birth. Myrtles, doves, sparrows, horses, and swans are sacred to Aphrodite. Eros was the Greek god of love, whose Roman counterpart was Cupid ("desire"). Some myths make Eros a primordial god, while others say he is the son of Aphrodite. Pan, the companion of the nymphs, is the god of shepherds and flocks, nature, mountain wilds, hunting, rustic music, and theatrical criticism. Pan has the hindquarters, legs, and horns of a goat, like a faun or satyr. Pan's homeland of rustic Arcadia associates him with fields, groves, wooded glens, fertility, and the season of spring. In Roman religion and myth, Pan's counterpart was Faunus. 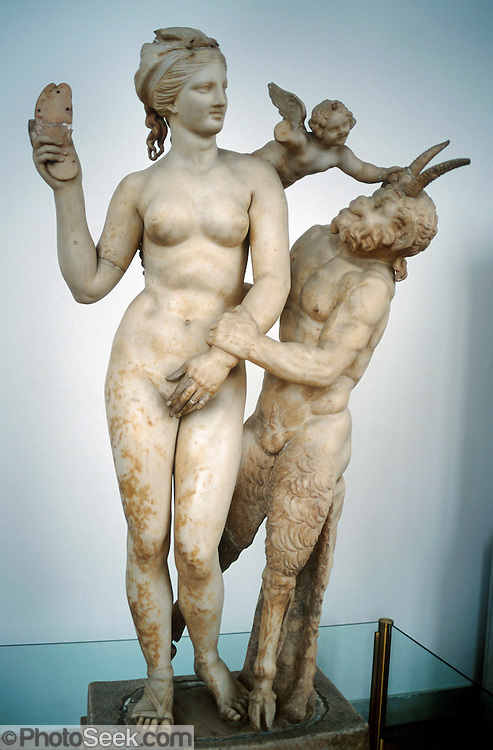