Dredge No. 4, a National Historic Site of Canada, was the largest wooden-hulled dredge in North America. Operating from 1913 until 1959, it recovered 8 metric tones of gold. After nearly 30 years on the Klondike River, it was re-built near the mouth of Bonanza Creek to run for another 18 years before sinking where seen now, along Bonanza Creek Road 13 kilometres (8.1 mi) south of the Klondike Highway near Dawson City, Yukon, Canada. A hydro-electric dam 60 km away powered the massive water pumps, winches, and 72-bucket line to sluice gold from river gravel, 24-7 from late April or early May until late November each season, and sometimes throughout winter. Vast river beds were upended into tailing piles, including 26 homes, as the ongoing Placer Mining Act gave mining rights precedence over surface rights. Dawson City was the center of the Klondike Gold Rush (1896–99), after which population rapidly declined, in Yukon, Canada. Dawson City shrank further during World War II after the Alaska Highway bypassed it 300 miles (480 km) to the south using Whitehorse as a hub. In 1953, Whitehorse replaced Dawson City as Yukon Territory's capital. Dawson City's population dropped to 600–900 through the 1960s-1970s, but later increased as high gold prices made modern placer mining operations profitable and tourism was promoted. In Yukon, the Klondike Highway is marked as Yukon Highway 2 to Dawson City. This image was stitched from multiple overlapping photos. 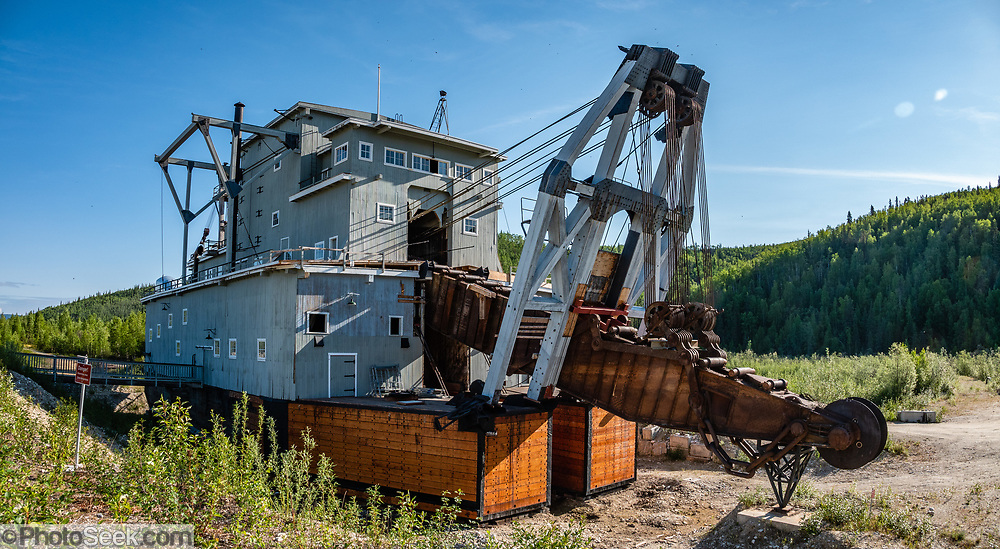